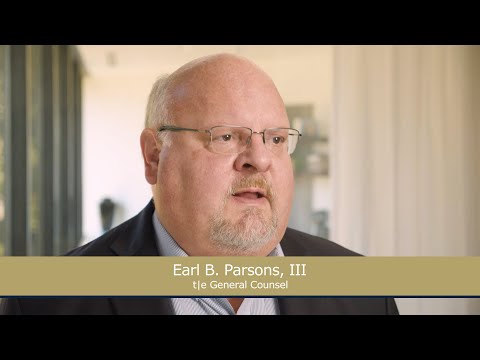 Earl Parsons is a member of t|e General Counsel, the firm’s fractional GC practice, and the firm’s government strategy practice. Prior to joining the firm, he was with Southern Company for 26 years. While at Southern Company, he held executive positions on both the legal and business side of the company.

In his most recent role, Mr. Parsons was the Deputy General Counsel – Commercial at Southern Company. There, he was responsible for systemwide general legal services in the areas of litigation management, system and government contracts, compliance, and labor and employee relations.

Before that, Mr. Parsons served as the organization’s Vice President – Chief System Contracts Officer and Associate General Counsel. In this role, Parsons provided legal oversight of contract activities for Southern Company operating companies with annual expenditures of approximately $5 billion. As part of this role, he developed and implemented a contracts program that had consistent, cost-effective corporate contract policies and management systems for all Southern Company subsidiaries. The program resulted in 1) assured compliance with laws and ethical standards, 2) assessment of legal risks and liabilities, and 3) cost effective contract services.

One of his more interesting roles on the business side of Southern Company was Managing Director, SWEBGAS in Bristol, England. As the Chief Executive of a start-up business in a deregulating, competitive market, he oversaw all aspects of the business including the development and implementation of industrial, commercial and residential marketing plans.